Summary Of Everything You Should Know About Slot Tournaments 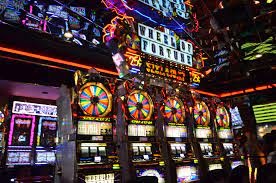 Slot tournaments are simple to enter and can provide hours of entertainment. However, slots, like any other tournament, have their own basic rules that you must respect and understand before you start playing. If you’re thinking about entering a slot tournament, you’ve come to the right place. We will go through everything you need to know about how slot tournaments work and give you some guidelines on how to win them.

What exactly are slot tournaments?

When you visit a physical casino, you may notice that a section of the venue is blocked off by ropes. Behind them are usually a slew of people spinning slots at breakneck speeds. That is a slot tournament.

A player is given credit and a set amount of time to play through them in an event like this. The casino then keeps track of the winnings, and the player with the most coins wins the entire pot.

These events are huge in the gambling world. They are frequently held in some of the world’s largest casinos and attract slot enthusiasts from all over the region. And, while there are no head-to-head matches like in other championships, these matches are just as competitive.

Are slot tournaments free of charge?

We mentioned earlier that the casino provides players with credits to use in the tournament. However, participation in these tournaments is not free. To get your place in the tournament, you usually have to pay a fixed entry fee known as a ‘buy in.’ The money earned by the casino from these fees is then used as a prize for the winner.

Obviously, the casino keeps a portion of it, and the remainder is sometimes divided among the top three ranked players. Some tournaments, on the other hand, take a winner-take-all approach.

By hosting an event like this, they are able to provide casino enthusiasts with exactly what they want while also promoting their brand. Even if the tournament does not attract new participants, they have not lost any money because the prizes are made up of buy-ins.

In addition, some casinos host private tournaments for frequent players. They sometimes don’t even have buy-ins and are solely concerned with connecting with the most loyal customers. The quality varies depending on the casino, but most of these events are enjoyable and memorable.

We previously discussed the fundamentals of slot tournaments. But there’s a lot more you should know if you want to participate in one. This is especially true given the various types of these events.

There are two major types of tournaments to be aware of: Sit and Go Tournaments and Scheduled Tournaments.

The former are tournaments with no set time limit. Basically, you can join whenever you want and still compete for the big prize. They usually remain open until there are enough participants. Most of the time, these are smaller events with fewer participants than a scheduled tournament. They also don’t last as long, and the longer it takes to determine the winner, the larger the prize pool becomes.

Tournaments that are scheduled, on the other hand, have a set start and end time. They can last anywhere between 5 minutes and a month. These events are more formal, and the prizes are usually larger.

Is there a set of rules?

Another thing to keep in mind when spinning is any tournament-specific rules.

The rules vary depending on the casino hosting the event, but there are some that are strictly enforced the majority of the time.

For instance, there is usually a time limit that you must be aware of while playing. You don’t have to spend a lot of time strategizing because you’re not using your own money but rather casino credits. It’s all about spinning as many times as you can to increase your chances of winning. Furthermore, many players waste time celebrating their victories, this does not always pay off.

It’s preferable if you’ve previously played on that machine and are familiar with the pg สล็อต timeframe.

Go for the Maximum — when playing a slot tournament, you should always spin with the maximum stakes to increase your chances of landing some of the large winning combos. The more you win with your available credits, the higher your ranking will be. As a result, aim to play with as many paylines as the machine permits.

Don’t Go For Modest Wins – Of course, every small victory on a slot machine promises more money to play with. Grinding for little victories, on the other hand, will not help you rank high.

The more spins you get, the better — When you’re playing a simple slot machine game, you don’t want to spin too rapidly. When it comes to slot tournaments, however, the more rounds you play throughout the tournament time frame, the better your odds of hitting huge prizes.

If you enjoy gambling, slot tournaments will be right up your alley. Not only are there chances to win large sums of money, but these events are also entertaining. They add a bit of dynamism to spinning slots and enhance the thrill of winning a large jackpot.

Next articleWhat To Do Before Playing Slot Online With Real Money?