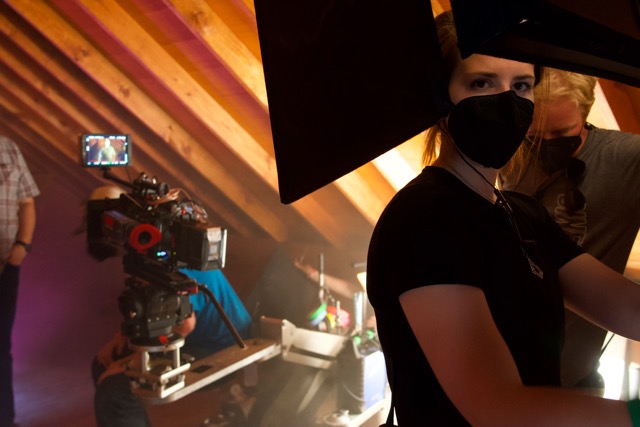 Though not yet released, those who have seen Only the Good Survive can attest to the thrill ride that this offbeat film provides. A story which powerfully utilizes tension and misdirection (of the most intentional and enjoyable variety), the impact of the uber-talented cinematographer Lucia Zavarcikova is profound in manifesting a visual style that is as unique as it is thrilling. The film is unapologetically quirky and infused with the creative chutzpah which one might expect from a Texas filming location. Among others, the film’s stunning cast includes D’Pharaoh Woon-A-Tai (of Taika Waititi’s Independent Spirit Award Winning and Golden Globes Nominated Reservation Dogs), Sidney Flanigan (Hollywood Critics Association/New York Film Critics Circle Award Winning Actress of Never Rarely Sometimes Always), Jon Gries (of the iconic Napoleon Dynamite) and Frederich Weller (of the Oscar Award Winning BlacKkKlansman and Oscar Nominated Armageddon). Producer Thomas Mahoney (Wild Indian), director Dutch Southern, and DP Zavarckiova have established a tone for this film that is as enjoyable as it is shocking and surprising. Only the Good Survive is the kind of experience that only comes along once in a decade.

Like any great creative talent, Ms. Zavararcikova is drawn to challenging opportunities. Recalling her first exposure to Only the Good Survive she relates, “Immediately after reading the script, I became very intrigued by the fast paced story and great potential for fun visual design. I took the job and flew to Texas to shoot it a few days after.” The visual style of this film is perhaps the most stark and identifying element of it. The use of pastel colors in the lighting and fast dolly pushes which introduce each new character combines for a signature that permeates throughout the entire story. This “rule” extends to all parts of the film including locations. Lucia informs, “When scouting locations, we carefully picked colors for each of the locations. These were color pairings that would signify their connections to the characters and emphasize their dynamics. For example, the main character Brea was supposed to be portrayed very naive and childlike with colors that were baby blue and baby pink. Everything around her was bathed in these colors, starting with her costumes, props and even the walls of her apartment. The two other characters, Erve Gann (Played by Will Ropp) and Dev Watts (Darius Fraser) had a love connection that never happened so their colors were the same, just flipped. Blue and purple for Erve and purple and blue for Dev. Distinctive color palette in combination with the always-present whip pans and fast dolly push ins created a dynamic visual style for a dynamic story.” Notably, towards the end of the film this color tapestry disperses in deference to natural warm lighting which communicates that “interpretation” is no longer necessary and the truth will emerge.

Only the Good Survive may be a tale about a robbery gone wrong but it’s the way in which the story is related that makes it unavoidably attractive. From the beginning moments when a young woman named Brea Dunlee is found alone in a rural Texas town and the local sheriff begins to interrogate her, this story becomes a harrowing ride of mystery and violence in which we are never quite sure what to believe. The delayed gratification of knowing what actually occurred is simultaneously agonizing and riveting. Rare coins, robbery, and a cult that sacrifices newborn babies are the incendiary components which make Only the Good Survive a tale that leaves audiences wide eyed and exhausted. This is state most relatable to DP Lucia Zavarcikova who concedes, “I don’t think I’ve ever felt such exhaustion as I did after four overnights in the forest alone, not counting all the other days. Same goes for my amazing lighting and camera crew who gave this film their all and by the end of week #3, we could definitely feel it. After the 1st AD called ‘wrap’, I instantly broke down to tears and the entire cast and crew celebrated weeks of their hard work. This was a bonding experience that I’ll never forget.”